Bernie Sanders and the Christian Vote

I became a democratic socialist in 1985 because, in large part, this approach seeks to address many societal and

other ills by addressing underlying (as opposed to superficial) causes. Many of these problems and their solutions lie in redressing specific moral failings such as unbridled corporate greed, which is something democratic socialists such as Senator Bernie Sanders tackle head-on with genuinely progressive, transformative ideas and proposed legislation. And, at the heart of democratic socialism, is a sharing and “level the playing field” ethic that is consonant with core Jewish and Christian beliefs and teachings.  Luke Tomycz “cores the apple” on an article titled “Bernie Sanders and the Christian Vote” which I wholeheartedly recommend you read and then share with others in your orbit: https://medium.com/@ltomycz/bernie-sanders-and-the-christian-vote-2350b31a6bbf#.94h2wp30g 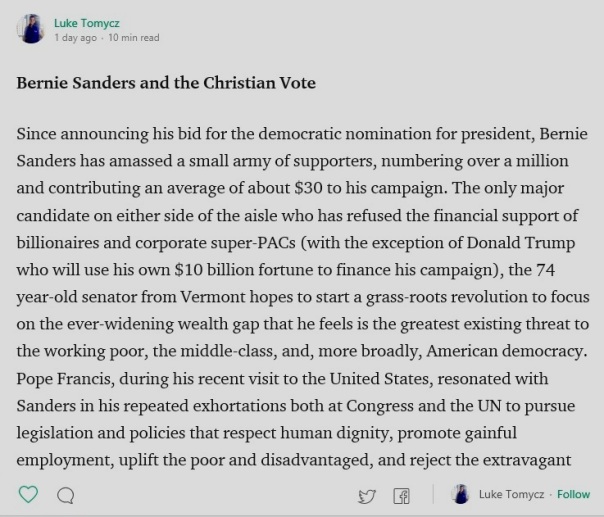 Comments Off on Bernie Sanders and the Christian Vote