NEJM editor: “No longer possible to believe much of clinical research published” 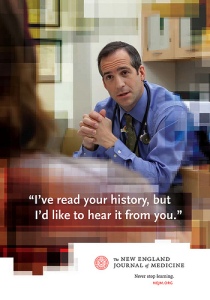 Harvard Medical School’s Dr. Marcia Angell is the author of The Truth About the Drug Companies: How They Deceive Us and What to Do About It. But more to the point, she’s also the former Editor-in-Chief at the New England Journal of Medicine, arguably one of the most respected medical journals on earth. But after reading her article in the New York Review of Books called Drug Companies & Doctors: A Story of Corruption, one wonders if any medical journal on earth is worth anybody’s respect anymore.

“It is simply no longer possible to believe much of the clinical research that is published, or to rely on the judgment of trusted physicians or authoritative medical guidelines. I take no pleasure in this conclusion, which I reached slowly and reluctantly over my two decades as an editor of The New England Journal of Medicine.”

“Thanks largely to him, children as young as two years old are now being diagnosed with bipolar disorder and treated with a cocktail of powerful drugs, many of which were not approved by the Food and Drug Administration (FDA) for that purpose, and none of which were approved for children below ten years of age.”

Biederman’s own studies of the drugs he advocates to treat childhood bipolar disorder were, as The New York Times summarized the opinions of its expert sources, “so small and loosely designed that they were largely inconclusive.”

In June 2009, an American senate investigation revealed that drug companies, including those that make drugs he advocates for childhood bipolar disorder, had paid Biederman $1.6 million in “consulting” and “speaking” fees between 2000 and 2007.

“Two of Biederman’s colleagues received similar amounts. After the revelation, the president of the Massachusetts General Hospital and the chairman of its physician organization sent a letter to the hospital’s physicians expressing not shock over the enormity of the conflicts of interest, but sympathy for the beneficiaries: “We know this is an incredibly painful time for these doctors and their families, and our hearts go out to them.”

Biederman’s failure to disclose his Big Pharma payments to his employers ar Harvard (as is required for all Harvard employees) has been under investigation* for the past two years by Harvard Medical School, in as journalist Alison Bass describes this: “what must be the longest investigation in that school’s history”).

Dr. Angell’s article contains bombshell after bombshell, all gleaned during her tenure as NEJM editor. For example, on the subject of doctors who are bought and paid for by Big Pharma, she writes:

“No one knows the total amount provided by drug companies to physicians, but I estimate from the annual reports of the top 9 U.S.-based drug companies that it comes to tens of billions of dollars a year in North America alone.By such means, the pharmaceutical industry has gained enormous control over how doctors evaluate and use its own products. Its extensive ties to physicians, particularly senior faculty at prestigious medical schools, affect the results of research, the way medicine is practiced, and even the definition of what constitutes a disease.”

Revelations like this from medical profession insiders cast serious doubt on more than what’s printed on the pages of these medical journals.

Your physician reads these journals, treatment decisions are changed, care is affected, drugs are prescribed – all based on Big Pharma-funded medical ghostwriter-prepared journal articles from physicians who fraudulently claim to be the study authors. Then you walk out of your doctor’s office with a prescription for a drug that may or may not kill you, based on treatment protocols written by doctors like Biederman who are on the take from Big Pharma.

A very recent example of the sad reality over at the once-prestigious New England Journal of Medicine is their decision to publish a drug company-funded review article. This review attempts to discredit emerging research suggesting that many years of using Merck’s Fosamax or Procter & Gamble’s Actonel (both osteoporosis drugs in a class called bisphosphonates) could actually result in more leg bone fractures.

Not surprisingly, drug manufacturers of bisphosphonates are fighting back ferociously against this emerging (independent) research.  A Merck-funded review paper published in the NEJM on March 24, 2010 concludes:

“The occurrence of fracture of the subtrochantericor diaphyseal femur was very rare, even among women who had been treated with bisphosphonates for as long as 10 years.”

“The study was underpowered for definitive conclusions.”

You might justifiably ask yourself why a medical journal would stoop to publishing a meaningless scientific paper that the paper’s own authors admit lacks any conclusion. Even more troubling than a journal article that was itself bought and paid for by Merck, is the conflict of interest disclosure list at the bottom of this NEJM article.  It reads like a Who’s Who of Big Pharma.

Why is the New England Journal of Medicine or any other credible medical journal accepting for publication articles submitted by paid employees of pharmaceutical companies?

As a cardiac patient, I’m gobsmacked by what appears to be this systemic corruption of not only medical journals who continue to publish what they clearly know is tainted research linked to drug marketing, but of the very doctors whom patients trust to look out for us. Since my heart attack in 2008, I take a fistful of cardiac meds every day, and I have no clue which of them were prescribed for me based on flawed research or tainted medical journal articles funded by the very companies that make my drugs.

And worse, neither do my doctors.

Happily, there are other decent physicians out there who, like Dr. Angell, are just as outraged as she is. Her targets are not just guilty of unethical conflict of interest – they are criminals who should be charged with endangering our health while padding their wallets.

Drs. Joseph Biederman, Thomas Spencer and Timothy Wilens disclosed the disciplinary actions against them in a note to colleagues. According to a copy of the note made public upon request by the hospital, the three doctors:

• must refrain from “all industry-sponsored outside activities” for one year

• for two years after the ban ends, must obtain permission from Mass. General and Harvard Medical School before engaging in any industry-sponsored, paid outside activities and then must report back afterward

• face delays before being considered for “promotion or advancement.”

The three doctors have been under the political microscope since June 2008 when Senator Charles Grassley, R-Iowa, began investigating conflicts of interest involving clinicians. Biederman and Wilens have since admitted to accepting $1.6 million from drug companies whose drugs they were promoting; Spencer took $1 million.

Senator Grassley said, according to an online version of the Congressional record:

“These three Harvard doctors are some of the top psychiatrists in the country, and their research is some of the most important in the field. They have also taken millions of dollars from the drug companies.”

Comments Off on NEJM editor: “No longer possible to believe much of clinical research published”